From tree to nib: making a small batch of cacao 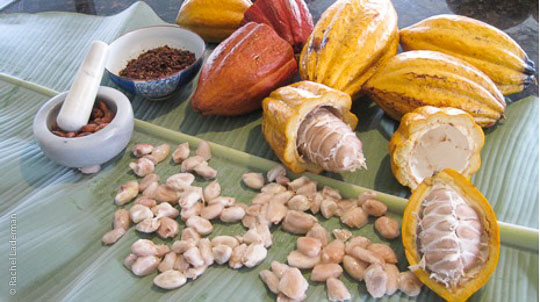 Cacao pods and seeds with pulp. One of the many lovely things about Hawai’i is we can grow our own cacao or find the pods fresh for sale. Although making chocolate is pretty complex and involves some expensive equipment (Champion juicer, Cuisinart or melanger, molds), you can get a great chocolatey result from just using the nibs. Here is how to select a handful of fresh cacao pods and then ferment, dry, roast, and winnow them to create bitter yet delicious and nutritious nibs, and a few ways to use those nibs.

Laupahoehoe farmers market.The Laupahoehoe Farmers Market started in September of 2009 with two enterprising women setting up a tent and selling their harvest and that of their neighbors. They persevered for several weeks until another vendor, and then another, started setting up Sunday after Sunday. 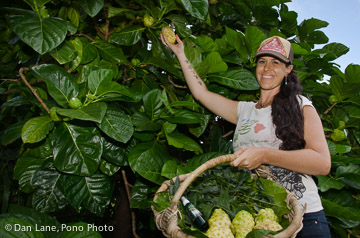 Raven C.J. Liddle of Second Skin Naturals in Moloa'a, Kaua'i, harvesting ingredients for her line of skin care products.Second Skin Naturals™ produces beauty and skin care products, including its flagship Hawaiian Jungle Shield Spray, salves, scrubs, masks and rejuvenators, all made from certified organic and locally grown ingredients. The company’s founder Raven C.J. Liddle created the company out of her personal search for high-quality skin products, finding that the market did not supply what she was seeking.

On November 19th the Hawai'i County Council voted 6-3 in favor of Bill 113 (Council members Onishi, Yoshimoto and Ilagan voted Against), which restricts future cultivation of GMO crops on Hawai'i Island.  Mayor Kenoi, who faced substantial political pressure to veto the bill, instead signed Bill 113 into law on December 5th with a strong statement advocating local control of agriculture in Hawai'i County: "With this new ordinance we are conveying that instead of global agribusiness corporations, we want to encourage and support community-based farming and ranching."