Pulelehua (Kamehameha butterfly). The author spotted this butterfly in her garden near some mamaki bushes, which started off her interest in this topic.

There’s a beautiful trio playing in the woods. It's a native trio that has been here a long time. The players are the māmaki shrub (Pipturus albidus), the koa tree (Acacia koa), and the Kamehameha butterfly (Vanessa tameamea), or pulelehua. If you have the right conditions, you can invite them to your garden, especially to encourage the pulelehua, whose numbers are diminishing, to thrive on the islands again.

Hawai'i is uniquely home to the māmaki, koa, and pulelehua ensemble - all three are endemic; they are found nowhere else on our planet. The female butterflies seek out māmaki shrubs to lay their tiny eggs. When the Kamehameha caterpillar emerges, it builds a small shelter out of the leaf by cutting a half-circle out and pulling it over into a little flap, or tent, that it then sews closed with silk. It uses this as a hide-out while it grows, eating its shelter until it is too riddled with holes, then moving on to make a new one. 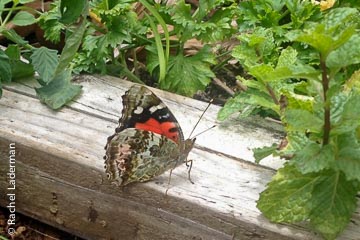 The Kamehameha butterfly with wings folded showing the speckled, silvery pattern on the underside.The adult butterflies feed on sap oozing from damaged koa trees. The males seem to prefer this sometimes fermented and bubbling sap. Kamehameha butterflies’ backs (the upper side of their wings) are brightly contrasting black, orange, and white, but they are pale and mottled underneath, and with their wings folded closed they blend in with the silvery bark of the koa tree.

The Kamehameha butterfly is one of only two butterflies native to Hawai'i. The other is the Hawai'ian blue (Udara blackburni), which lays its eggs on koa and ‘a’ali’i, another native shrub. The Hawaiian blue seems to have a healthy population.

Sam 'Ohu Gon III, a Senior Scientist and Cultural Advisor with The Nature Conservancy of Hawai'i, explains the importance of pulelehua to native Hawaiians. He points out that pulelehua is mentioned in the long chant of creation, the Kumulipo, on lines 0287-0288:

“Hanau ka Pe'elua ka makua
Puka kana keiki he Pulelehua, lele”
“Born is the pe'elua (caterpillar), the parent.
Emerged is their child, the pulelehua, and flies off.”

As Gon points out, “Of the tens of thousands of living things that are native to Hawai'i, only a subset of the most important species are mentioned in the Kumulipo, representing the range of diversity of the islands. That the pulelehua is among them (and the caterpillar from which it springs) is a fundamentally important point.”

Sadly however, as with many native species, the Kamehameha butterfly is no longer found in places where it used to be prolific. Entomologists with the University of Hawai'i at Manoa set up the Pulelehua Project to map sightings of the butterflies. The Project encourages people to learn how to identify the butterflies, eggs, and larvae, and to take a photo if they see one and submit it to the project’s website -- www.KamehamehaButterfly.org. The website has excellent photos showing how to identify the butterfly, compare it with look-alikes, and recognize the distinctive shelters the caterpillars build; see Pulelehua Project - How to Identify. It also has information on several other native host plants for the butterflies; see Pulelehua Project - Other Host Plants.

“Before this project, we knew that the Kamehameha butterfly had declined in its range, and that it wasn't found in many places where it used to be common in previous decades,” explains Will Haines, principal scientist on the project. “But we didn't have a very complete picture of where it still occurred. Insect distributions can be very difficult to map. They have short life spans (usually a few months), and many insects disperse far distances... So when mapping distributions, it is really helpful to have as many observations as possible and cast a wide net. Observations from the public really help with this.”

It can be hard for the casual observer to tell apart the Kamehameha from the Red Admiral and Painted Lady butterflies, so photos are necessary to make a positive ID. From the data the researchers collect, they will be able to determine where to establish habitat restoration sites for both the adults and the caterpillar stages of the butterflies. 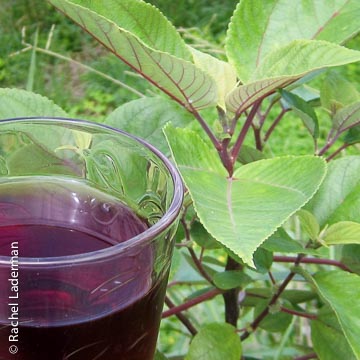 Mamaki plant with a cup of mamaki tea. Mamaki leaves make a delicious, healthful tea, similar in color to the red veins and stems.

One of the surprising and wonderful things about the māmaki-pulelehua relationship is that māmaki is a useful plant for humans, too, and therefore a welcome member of home gardens. It is in the nettle family, Urticaceae. It grows as a shrub or small tree, usually from 5’ to 15’ tall, that can be easily added to home landscaping. It prefers wet, wooded areas and grows well at most elevations. Like its relative on the mainland, the stinging nettle, māmaki has healthful benefits. But lucky for us, māmaki is harmless to touch.

The leaves can be used fresh or dried to make a tea that is calming, cleansing, and traditionally used as a tonic or “pick-me-up”. Several farms on the Big Island grow māmaki commercially. To prepare the tea, pour boiling water over a handful of leaves and steep for at least 20 minutes, or even overnight, until a rich red color develops. Steeping longer does not make the tea bitter, as it does with caffeinated teas. The leaves can also be cooked and eaten as a green vegetable.

The small, white fleshy fruits, which grow directly off the stem and have many small seeds, are also edible and medicinal. They have a taste and crunch reminiscent of cucumber. They are said to be mildly laxative, and have been used as a healing agent for sores and wounds, and a treatment for thrush in children. Mature stems of māmaki traditionally were used to make a heavy type of kapa (cloth).

Look for māmaki seedlings and young koa trees at native plant nurseries or farmer’s markets. Māmaki grows well from cuttings and seeds, as well. If you grow māmaki, just remember that caterpillar damage is a good thing, and be sure not to spray!

“I would suggest that people start planting māmaki as much as possible, especially in wet or upland areas on the Big Island, where the butterflies are doing relatively well,” says Haines. “The more you plant, and the more your neighbors plant, the more likely it is that the butterflies will find it. One isolated māmaki planted far from native forests is unlikely to attract the Kamehameha butterfly, but if the whole neighborhood plants it, and if it's within flying distance from natural populations of māmaki, the butterflies are much more likely to colonize your plants and establish a population.”

He adds that Kamehameha butterflies visit other flowers as well, so plant a variety of native flowering plants to offer a complete habitat for the graceful pulelehua.

As Gon explains, caring for the natural world, to Hawaiians, is like caring for family. “All living creatures of land and sea were considered elder relatives, so the respect afforded is familial and the relationship is reciprocal,” says Gon. “It was expected that people as younger relatives should care for the elders that provide them with life.”

What could feel better than knowing that your plantings have set the stage for the circle of life, as played so elegantly by the māmaki bush, the pulelehua, and the koa tree?

Rachel Laderman moved to Hawai'i Island four years ago to farm and live off-grid in a small community of friends and family. Before this she worked for 20 years as an Environmental Health Educator in Olympia, Washington. She feels extremely lucky to be able to spend her days planting, foraging, and preparing foods. Read her blog at http://marketlessmondays.wordpress.com/.