A partially mature Shiitake mushroom emerges from a koa log.

Have you ever accidentally kicked over a log while wandering through a forest, and noticed the white mass of cobweb-like fibers running across the ground? That's mycelium. Only one cell-wall thick, yet capable of supporting more than 30,000 times its own weight, mycelium wend their way through nearly all healthy land-based ecosystems. Given the proper conditions, mushrooms can emerge from these fungal fabrics.

Long marginalized in Western culture, mushrooms are gaining greater recognition for their outstanding benefits to human and ecological health. As keystone organisms, fungi play a primary support role in the recycling of carbon, nitrogen, phosphorus, and various minerals.

Mycelia can be thought of as externalized stomachs that consume organic matter as they move across the landscape, aiding in the decomposition and exchange of various nutrients for plants, insects, and other creatures. Fungi are among the only organisms in nature capable of breaking down lignin and cellulose, the two primary components of woody plants.

Certain species of fungi have potent medicinal benefits for humans -- from combating bacterial and viral infections, to warding off various types of cancer. Mushrooms also happen to be one of the best land-based sources of Vitamin D – but only after they have been sufficiently exposed to sunlight or Ultraviolet-B light (see here).

More research has been conducted on the health benefits of Shiitake (Lentinula edodes) than any other mushroom. An immune boosting, anti-viral, choice edible fungus, the Shiitake mushroom also strengthens the liver, combats cholesterol, and has strong anti-tumor properties. 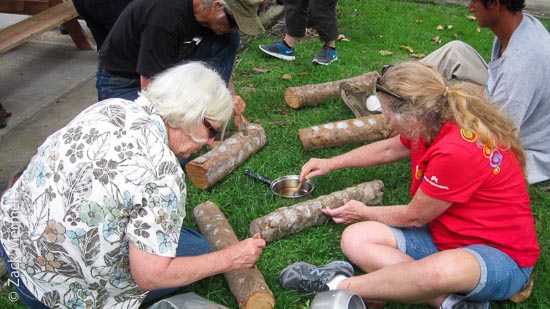 Participants in a mushroom cultivation class use melted wax to protect the logs they inoculated with Shiitake mycelium.

Turkey Tail (Trametes versicolor) mushrooms have been shown to effectively inhibit the growth of cancer cells in the stomach, liver, lung, and prostate. A powerful anti-viral, Turkey Tail is particularly effective against Hepatitis C. In the kitchen, Turkey Tail is best added to broths, as it can be quite chewy.

Yet another local edible fungus is the Pepeiao, or Wood Ear (Auricularia cornea). This mushroom can be grown on Acacia species, including our native Koa tree. And the fruiting mushroom body truly does resemble an ear! In addition to its unusual appearance, Pepeiao has impressive anti-tumor and anticoagulant properties. Though not particularly flavorful, Pepeiao has a long history of use as a food and medicine, and is believed to have been the first mushroom cultivated by the ancient Chinese. My first interactions with Pepeiao were as a child growing up in Volcano Village, where I occasionally saw the Wood Ear emerging from the tree trunk of the hapu'u.

One of the most common of the edible decomposer fungi, the Oyster mushroom (Pleurotus ostreatus) is also among the easiest to cultivate. Growing material for the oyster mushroom can include wood, straw, grain and coffee grounds. Oyster mushrooms have a wide range of health benefits; like most medicinal fungi, it is anti-viral, and has also been shown to lower cholesterol and inhibit tumors in lab mice.

All mushrooms (including those commonly found in salad buffets at restaurants) should be cooked thoroughly before being eaten. Applying heat to the edible fungus enables the mushrooms' enzymes to be more readily absorbed by our bodies. For more in-depth descriptions on the health benefits of various medicinal mushrooms, please explore Paul Stamets' excellent book, Mycomedicinals (Click here). All of the above references were sourced from this book.

How do we transform farm and garden "waste" into marketable products? For slightly less than $200, the home-scale fungal enthusiast can set up a basic laboratory system for growing Shiitake, Oyster, Turkey Tail and other edible and medicinal mushrooms on many of the "weedy" exotic trees and grasses found across the Islands. Fortunately, the techniques for inoculating (i.e., "infecting") logs, stumps, and wood chips are fairly easy to learn. Other suitable hosts for our future fungal feasts include spent brewery waste, lawn clippings, coffee grounds, and the shells and husks of coconuts and macadamia nuts. 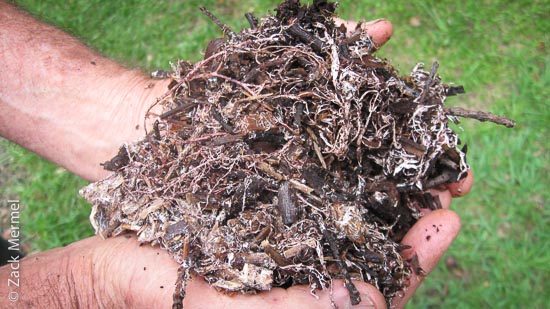 And what of the byproducts from larger scale farm operations? According to the State of Hawai'i's Agricultural Statistics Branch, in 2012, after processing their harvest, coffee growers across the Aloha State were left with approximately 22 million pounds of nitrogen rich coffee pulp. This pulp happens to be an ideal medium for growing oyster mushrooms. The enterprising farmer could perhaps capitalize on this "waste" product.

Much of the research into the cultivation and marketing of edible and medicinal mushrooms has taken place in temperate climates. There is much to explore about how to partner with the many species of mushrooms that thrive in our subtropical island home.

One part ecologist, one part horticulturist, one part land designer, Zach Mermel has been exploring the overlaps of these three disciplines for the better part of a decade. An amateur mycologist, Zach will be teaching advanced classes in mycorestoration (how fungi can help repair degraded landscapes) and tissue culturing of fungi in early 2014 through Hawai'i Community College's Office of Continuing Education and Training (OCET).