Hey, Who are You Calling a Weed?

For what solid reason do I know this plant is not useful here? What do I know about this plant I am labeling a weed

Conversations with the Most Poisonous Plant in the World

Recently, I took part in starting a small agroforest on a section of cleared property. I prepared the newly excavated landscape, pulling any unwanted existing plants, then applied what I thought was a good layer of mulch. Next came the planting of young fruit trees, along with supportive shrubs and edible ground covers. Wiping dust and soil from my forehead and hands, I walked away crossing my fingers for a good combination of rain and sunshine. I revisited this area day after day, monitoring and watering as needed. Very quickly it was easy to see little green castor beans (also known as castor oil plant) sprouting all over, their dormant seeds having been awakened by the disturbed soil.

In contrast to what I had planted, the castor bean seemed the fastest growing and the fastest spreading, and, of course, one plant that I did not want! ... or so I automatically thought. The term “weed”, an unwanted, nuisance plant, entered my mind. As I mechanically reached for the first, guilty-as-charged castor bean, some questions immediately arose ... For what solid reason do I know this plant is not useful here? What do I know about this plant I am labeling a weed? If this plant could speak, what would it be saying to me? What is its role in this bigger picture we call an ecosystem? On a grander scale, do plants and I lead separate lives or do we actually have roles together?

Much (to do) About Nothing?

Recorded knowledge of living things today can have a separated, individualistic and object-oriented feel to it...a liver does this, a foot does that, the amount of vitamin C in an orange is some healthy amount. If I truly look at the world around me, isn't it much more of an all-encompassing organic process, serving much more than me? It's as if this planet is one huge amoeba living and breathing in one big glob, yet all its pieces are functioning, cooperating and thriving as one large organism (the concept known as Gaia). How else could it be? If all this organic activity wasn't successful, it seems that life would have burned itself out eons ago. As much as disease and death can lead to suffering, those conditions are also a necessary part of life... letting go, allowing space for new growth to take place. Interestingly, just like the fate of a plant being pulled from its life support, we don't have a choice in how we leave this physical world. Life is a giving and receiving system. This castor bean is possibly serving a purpose much more than I can see. I'm not sure I can justify pulling out this so-called weed. Maybe what I need to do is nothing at all, however, there also could be some consequences:

The reason that man's improved techniques seem to be necessary is
that the natural balance has been so badly upset beforehand by those
same techniques that the land has become dependent on them.
(Fukuoka, 1978)

Masanobu Fukuoka, author of The One-Straw Revolution, has a very good point here. When I prepared this site based on what I wanted, I severely damaged this area's natural support system ... unwelcome plants pulled up, dug up ... exposing soil to the elements where vital nutrients can dissipate quickly and, depending on weather conditions, releasing any moisture the ground was holding. 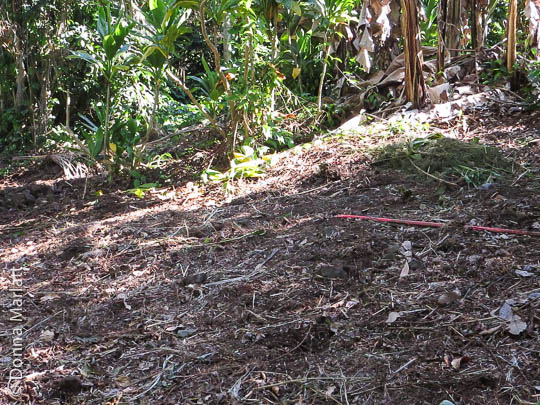 One corner of the newly prepared site. I provided a mulch layer over the top (not shown), pretending to be that natural process which would, over time, scatter decaying organic material that would protect and feed the ground underneath. The use of an ō‛ō bar (mid right) was required for removing the more stubborn, deeply rooted elephant grass. What are the effects of my drastic actions to this area?

It's as if the wisdom of an ancient organic being knows its body needs mending and willfully responds. Hidden in living matter, lying dormant deep in the soil, the castor bean's seeds established fairly quickly, covering up the bareness like a bandage on an open wound. Interestingly, castor bean had not been that predominant previous to the site's clearing. It acted as if it had a call-to-duty, waiting for the perfect opportunity for its vigorous life to have purpose. 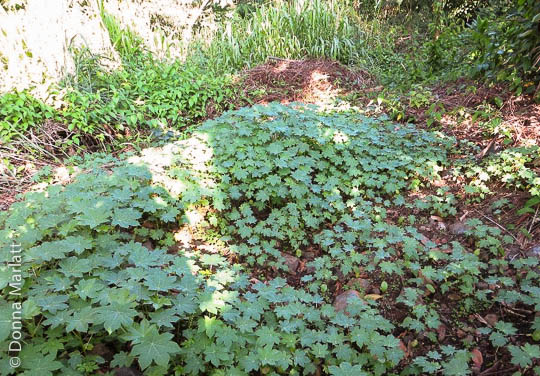 “Undesirables” that had been removed from the site - elephant grass, desmodium and other vines - continue growing on the outskirts. The mass of green vegetation in the foreground is castor bean (Ricinus communis) which sprouted in as little as a week's time. If this area had been sheet mulched more thoroughly, the castor bean may not have been so vigorous. I'm now wondering if sheet mulching for all cases is such a great idea? A gardener might think, “a weed! I must eradicate it!” However, my current state of mind is to not be so reactive. It seems the castor bean is doing a good job (for now) at keeping the other undesirables out of the site. The synchronized germination of the castor bean seems to be serving as a bandage, preventing erosion, holding water and nutrients, and shading bare ground where moisture could quickly evaporate. Let's not forget the all important microorganisms living in the already existing organic matter, which also play a huge role in plant and soil health and benefit from the castor bean's seemingly protective nature.

Castor bean, along with some of its quickly growing neighbors - grasses, bitter melon and other unidentifiables - seem to have a mission together. Instead of coming from the fearful “weeds are going to take over the land and rob me of my food!”, I am now seeing the castor bean working in liaison with the environment playing the role of a pioneer species, a plant that quickly comes into disrupted ground. The castor bean seems to be cooperating and collaborating with other species, holding soil in place preventing erosion, growing rapidly creating abundant carbon material, and bringing water and nutrients closer to the surface with their root systems where other plants in their fragile new growth can also benefit. This indicates the castor bean is actually helping other plants become established and not behaving like a weed at this point.

To read the in-depth conclusion, download the full article "Hey, Who Are You Calling a Weed: Conversations with the Most Poisonous Plant in the World," by Donna Marlatt