Our Surprising Week of Eating Local

A few weeks ago, Lauryn Rego of Maui realized she was spending all her time focusing on things she didn't like. Her off-work hours were spent protesting pesticide spraying and fighting against genetically modified crops. She wanted to focus on something positive, and do something to support the "people doing it right" in Hawai'i - the farmers growing and selling organic food locally.

So Lauryn decided to start an eat local food week and challenged her friends (and anyone else) to join her. I saw it on Facebook and decided to jump on board.

Like Lauryn, although we have been trying to eat local, we also felt that committing to a week of eating 100% from Hawaii would move us off our comfortable plateau to trying more new local foods. Our friend and farm-neighbor David also joined, although his reason was that in addition to wanting that extra push to eat off the land, he was out of money (it being the end of the month). He also happened to have a good supply of his own farm-grown food, including a pig he had caught and butchered, a 100 pounds of cassava, and a good collection of bananas and liliko'i. It was a good time to eat what he grew!

The week was full of surprises. We thought it would be limiting, and that we would get hungry and feel deprived. Maybe we did experience a little of that -- but mostly we learned a lot and felt so good that, at the end of the week, we decided not to stop!

We had a head start because we have been experimenting with eating off our land for several years (see my blog). So we had on hand staples such as sweet potatoes and taro, fruits, eggs, and even some luxuries such as coconut flakes, spices, and sugar cane syrup. 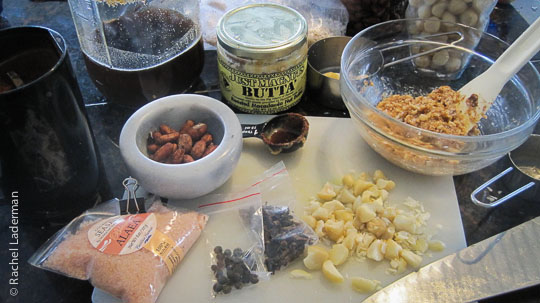 And then there is our weekly neighborhood farmer's market where we stock up on vegetables and dairy products all grown within a few miles. But even with these advantages, it was a significant change to cut out all grains, beans, most oil, and processed foods. We realized just how much we do still rely on the 83 - 92% of Hawai'i's food that is imported. Kind of a precarious situation! As stated in a bill promoting local foods that was passed by the state senate last spring, "Hawaii's reliance on out-of-state sources of food places residents directly at risk of food shortages in the event of natural disasters, economic disruption, and other external factors beyond the state's control." (see article).

According to that document, even crops that Hawai'i specializes in are largely imported - "90 percent of the beef, 67 percent of the fresh vegetables, 65 percent of the fresh fruits, and 80 percent of all milk purchased in the state are imported." None of the grain consumed on Hawai'i island is local (Melrose and Delparte). Given a major interruption in food imports, Hawaiians would have less than a 7-day supply of food in stores (Hawai'i Homegrown Food Abundance project).

Ono, and more satisfying, too!

One of our big surprises was how much we enjoyed every meal and how well fed we felt. At first it was a little difficult, with a good deal of time spent planning and preparing foods from scratch. (Lauryn, who wasn't on a farm, said the food preparation was like taking on a second job.) By the fourth day, we were ahead in food preparation so meals were easier, and we started to notice that we felt good in a new way. It wasn't just that we felt healthier, and it wasn't just that we felt smug gratification! Seriously -- something deeper shifted. It felt simple, and direct; we were eating food the way people have eaten for thousands of years, from where they live, and our cells seemed to know it. 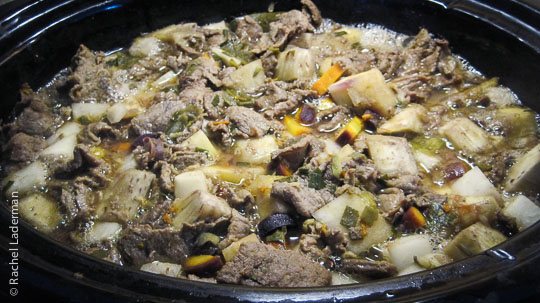 We served up this crockpot stew of ulu, beef, carrots, kohlrabi, and leeks for the potluck that ended our week of eating 100% local.

The limited food choices did force us to be creative, which was a good thing. David used his huge cassava harvest in many ways. He made flour that he used in crepes filled with local goat feta and tomatoes. "My new favorite food," he says. He made delicious oven-baked fries; he decided to bake rather than fry them to use less of that pricey macadamia nut oil. He found that Christmas berries make a great black pepper substitute. Lauryn ground up papaya seeds for the same purpose. We all realized that lemon, lime, a little local oil, delicious local sea salt, hot peppers and herbs are great ways to dress up foods, rather than dumping on our usual condiments such as shoyu, nutritional yeast, and ume, that while tasty do tend to make everything taste the same.

It helps if you have a good garden, or even friends with gardens. David ate well for the week on $36.00. We spent quite a bit more but still less than normal. For example, a large ulu cost only $3.00 and made several dishes, a hand of plantains cost $2, and our taro was free, compared to buying chips, crackers, potatoes, cereal, and rice.

One last surprising bonus was how little waste we created. I barely opened the garbage can all week. But I did have extra compost for the chickens and soldier fly larvae. (More about that next month!)

Elin Rosenblad, 2011, Adapting to a tropical diet in Hawaii in 6 weeks,
http://agroforestry.net/pubs/Adapting_to_a_tropical_diet_in_Hawaii.pdf

Rachel Laderman moved to Hawai'i Island three years ago to farm and live off-grid in a small community of friends and family. Before this she worked for 20 years as an Environmental Health Educator in Olympia, Washington. She feels extremely lucky to be able to spend her days planting, foraging, and preparing foods. Read her blog at http://marketlessmondays.wordpress.com/.