It's all free and abundant, so dig in! 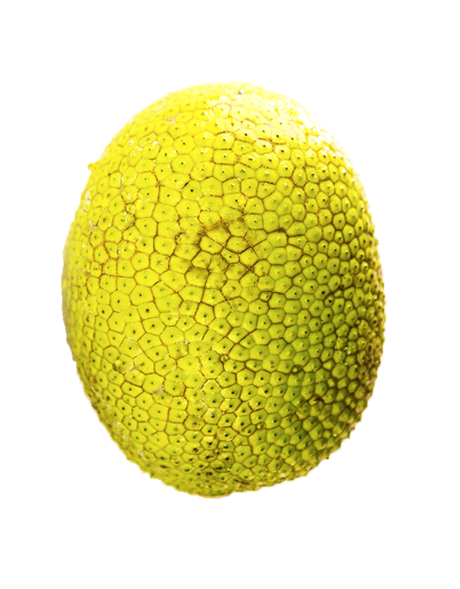 Ho'oulu ka 'Ulu is a project to revitalize 'ulu (breadfruit) as an attractive, delicious, nutritious, abundant, affordable, and culturally appropriate food which addresses Hawai'i's food security issues. It is well known that Hawai'i imports about 90% of its food, making it one of the most food insecure states in the nation. Additionally, since the economic downturn of 2008, many families lack access to affordable and nutritious food. We believe that breadfruit is a key to solving Hawaii's food security problems. 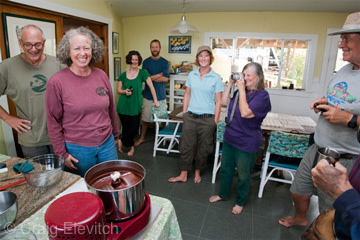 Leon Rosner and Una Greenaway (on left) guide the small-scale chocolate making process at their farm.
On March 18-19, 2010, Una Greenaway and Leon Rosner of Kuaiwi Farm hosted a two-session chocolate making workshop. For a minimal price they provided easy-to-follow demonstrations and instructions for making chocolate from scratch. With eight participants, everyone had a chance for a hands-on experience at each step in the process. The process began with cracking and winnowing the cacao beans and ended with pouring tempered chocolate into delicate molds. The smell of chocolate was intoxicating and at some points it seemed like magic was taking place in the kitchen.
Continue Reading

On March 3rd, 2010, Mala'ai, The Culinary Gardens of Waimea Middle School, the inspirational model of the school garden movement on Hawai'i Island, held its five-year anniversary celebration. At the mid-day event, as cloud-shrouded Mauna Kea stood sentinel against a bright blue sky, the trade winds stormed across her slopes towards Waimea. Nearly two hundred young and old gathered in the wind by the garden, equally divided between student-gardeners and community supporters to hear Kumu Pua Case present the opening pule. 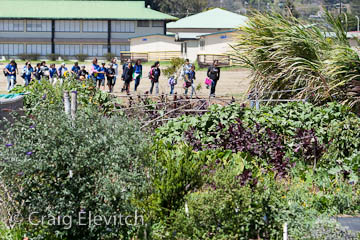 In the very moving introduction that followed, Kumu Case -- who is also the Ike Hawai'i teacher for Waimea Middle School -- declared  that, “Five years ago we pledged to create out of this land a learning tool and experience that would help make our children healthy and our school community whole – and we did.”

Culturing the Micro-Flora of the Body and the Soil

On January 23-24, 2010, Maui Aloha Aina Association presented a conference on "Culturing the Micro-Flora of the Body and the Soil" at Waiaha Farm in Holualoa, North Kona. Four experts presented at the conference, assembled from Acres USA and the Westin A Price conference held each year on the mainland.

There are several bee species that are cultivated for their products and pollination services but the most widely used species is the honey bee, Apis mellifera. In Hawai‘i and in the Pacific, there is a great potential for beekeeping at all scales. Rural areas in the Pacific are ideal for supporting beekeeping activities because of the abundant year round floral sources that can provide enough honey for family and/or community needs with the possibility of additional income from the selling surplus honey.

Started in October 2007 with 11 participants, the Third Annual Hamakua Alive! Festival held in Pa'auilo Elementary and Secondary School on October 24, 2009 was a huge success. The event has grown in leaps and bounds with over 40 booths this year and the largest ever number of entries in the cooking contest.

Can I Grow a Complete Diet?